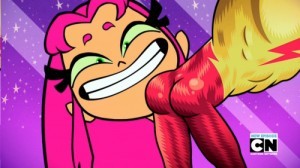 Kid Flash, tightest butt alive.
If the original show has its own radar page, it should be no surprise that this page exists. This show is actually much more risqué than its predecessor in terms of the humor, despite being seemingly targeted at a somewhat younger audience.