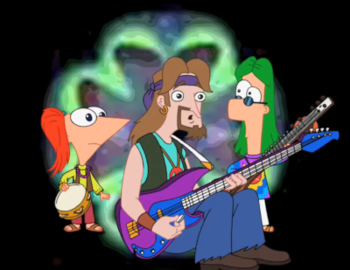 They noticed all the weird colors behind them...
Considering that Phineas and Ferb was created by two guys who worked on Rocko's Modern Life, SpongeBob SquarePants, The Simpsons, its Show Within a Show The Itchy & Scratchy Show, and (of all shows) Family Guy, it isn't surprising that this show gets a whole page dedicated to it...note perhaps they have a Getting-Crap-Past-the-Radarinator?
Advertisement:

Note: This page is for suggestive content sneaked by the censors by being subtle, not just anything you wouldn't expect to see in a kids show.

TV Tropes: Aren't you boys a little young to understand these jokes?
Phineas: Why yes. Yes we are.

Scriptwriters! You are SO busted!!