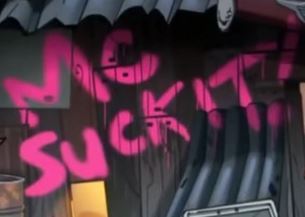 Along with the supernatural and paranormal occurrences, it seems that the radar is a little sketchy as well. Considering some people who worked on certain shows and other animated works also worked on Gravity Falls, this isn't that surprising.

Please exercise good judgment in editing this entry! Gravity Falls has a darker, more violent tone than most shows on Disney Channel/XD, and is rife with Black Comedy. Please only add something to this page if even given the nature of this show it's questionable. Guns, blood, death, gods, demons, and the aforementioned Black Comedy don't really count as Getting Crap Past the Radar within the context of Gravity Falls. What crosses the line on any other animated show usually doesn't here, so please keep that in mind when editing!

"The Legend of the Gobblewonker"

"The Hand That Rocks the Mabel"

"Soos and the Real Girl"

"The Society of the Blind Eye"

"Not What He Seems"

"Dipper and Mabel vs. The Future"

"Weirdmageddon 3: Take Back The Falls"

Shop at Home with Mr. Mystery!