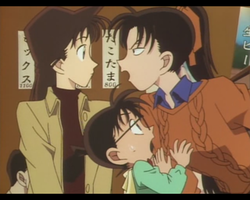 When we told this kid "keep your hands where we can see them", this wasn't what we were thinking of!

Shonen Sunday mangas aren't exactly known for sexual imagery, with the exception of Ranma ½. This one, however, seems to be kind of an exception...