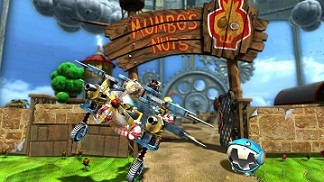 Subtle...
"We waited until the censors went on vacation!"
—Lead Designer Gregg Mayles in response to a fan on Twitter

Rareware's iconic series is ostensibly a E-rated kids-only affair, but its loaded with more than enough radar dodging innuendos and content to go around for the whole family.

The catch is that "Hintern" is "butt", but "Marsch" actually rhymes with a quite more vulgar word for the same thing.