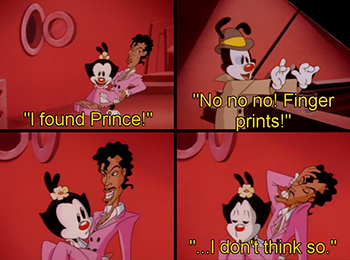 If you don't get the joke, try saying it out loud.
Yakko: It's that time again!
Dot: To make a cheese sandwich?
Wakko: To make the FOX censors cry?

To say that Animaniacs got crap past the radar would be like saying Florida gets a bit damp during hurricane season. The way this show contended with censors over content was more like total war, with the radar hopelessly outmatched. Though there were times where the censors won, like when they toned down the violence against Sam Fondlesome/Dan Anchorman on "Broadcast Nuisance"note fortunately, overseas cuts of "Broadcast Nuisance" have it the way it was originally intended and banned the sexually-charged Minerva Mink cartoons, it should be noted that these were Pyrrhic victories and didn't affect the overall outcome of the war.

Backed by Steven Spielberg (who, at that time, was the 500-pound gorilla in the animation world) and Warner Bros.' decades-long belief that the idea of cartoons being strictly for children was for other studios, the writing staff considered it a day wasted when they didn't push the envelope and get at least one Parental Bonus or risque Late to the Punchline moment into the show. The material was snappy, the joke-writing knew how to entertain young and old alike, and Censor Decoys were deployed in a Zerg Rush. Even the staff members at the time were amazed at what they got away with...and the fans who grew up with this show in the 1990s are as well. Besides this list, there are many online articles and videos dedicated to showing all the jokes that viewers understand now that they didn't when they were younger.

General rule of thumb when watching (or rewatching) this show: If any of the characters (Yakko especially) says, "Good night, everybody" after a particularly dubious line, it means, "We got one over on the censors...again!"

Pinky and the Brain can be found there.

(end credits roll: Yakko, Wakko and Dot appear at the tower door for The Stinger)
Dot: There's that smell again!...
(They look down at something out of frame)
All: Ew.