Quotes / Sci-Fi Writers Have No Sense of Scale 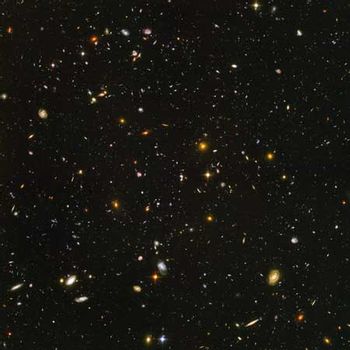 Right now, on your computer screen, are approximately 10,000 galaxies. Each of those galaxies contains anywhere from ten million to one trillion stars. The average star is roughly a million times the size of Earth. And yet, with all that junk, the Universe is more than 90 percent empty space. All of that, in this tiny photo. A photo that took 400 orbits and 800 exposures to take. And the kicker? The photo covers one thirteen-millionth of the entire night sky.

"I think you have seen the end of Kazon space. If you think about it, traveling for a year-and-a-half through a part of space dominated by one group is pretty amazing! I think traveling at warp speed for a year-and-a-half you would pass through the Federation, the Klingon Empire and a few other places."
— Rick Berman, executive producer of Star Trek: Voyager, on retiring the Kazon as villains
"This scene is shown from outside of the ship, and those that noted the whole "two light years across" thing a minute ago might also notice that the entire phenomenon, as shown, is not that much bigger than Voyager itself. I had no idea Voyager was so flipping huge! (Although, I did have some inkling from the opening credits that it's roughly the size of a planet.)

Dang it, writers! This whole mess could have been avoided if you had taken four words—"two light years across"—out of the script! It really wouldn't have changed anything else about the story."
— The Agony Booth on Star Trek: Voyager, "The Fight"

"Why didn't they just put the holo-ship, like, 500 miles away on another continent? or in fucking orbit? They were plannin' to transport the people onto the ship anyways. So why hide it in lake? other than to have Picard and Data discover it to give the illusion that this movie has some kind complex mystery plot? (Someone also please tell me the logic of havin' to hide somethin' that's invisible.)"
— Harry S. Plinkett on Star Trek: Insurrection
"You mean to tell me that they constructed a planet-sized shell around the Earth made of brains. Guess you can't make an omelet without breaking several trillion eggs. I simply can't find the words to comment on how amazing this is. I've heard my nephew in grade school make up some stupid, whacked-out stories while playing with action figures, but none of them were as insane as this. Plus—and this is the really crazy part—that means that the Death Star...is Earth!! ...no, I'm being real here: what you see as the Death Star is really the shell (made of compressed brain molecules, I remind you) surrounding the Earth. And I'm absolutely certain of this because just then, the Evil Space Lord attacks the Death Star Earth with X-Wings."
— Noah Antwiler on

"Long ago, in order to create Energon for the first Transformers, they would destroy stars. Stars. Plural. You'd think just one would've probably been enough for a whole planet for eons, but these guys apparently have the energy efficiency of a Hummer filled with cinderblocks—towing another Hummer filled with cinder blocks. Still, our galaxy alone contains a hundred billion stars, so we can spare a few; so the Primes said, 'We're gonna do that, but we'll make a rule: No destroying inhabited worlds.' And that's why The Fallen lost his shit at the beginning of the film....That's right: the 'Revenge' that The Fallen is seeking is because he's a lazy-ass robot who could not be bothered to walk next door and consume its sun instead."
— SFDebris on Transformers: Revenge of the Fallen
"Previously, we had the idea that an army of 10,000 Daleks is massively terrifying on a galactic scale. That would be, roughly, the population of Woodbury, Connecticut. (No, of course you haven't heard of it. That's the point.) Nation goes on here to establish the stakes of this story — ten million people across the galaxy might die. Although ten million people is indeed a lot, it's somewhat less significant when you consider the fact that it's roughly the population of Hungary, or if you prefer, Seoul. This is a somewhat lackluster figure on a galactic scale."
— Dr. Elizabeth Sandifer

on "Death to the Daleks"
"Let me get this straight, an Emperor of a thousand galaxies (try and get your head around the sheer size of that for a moment and consider how that could have even come about) has decided to take a vacation on a deserted theme park playing chess inside a gutted out Cyberman suit. Erm, why exactly? If it was supposed to be a place to hide away from his responsibilities I can imagine fifty better destinations off the top of my head... Instead of clenching my butt with fear that the Cybermen were coming I was groaning at the reveal that there were twelvety million of them (what is the obsession with huge numbers?)"
— Joe Ford

on Doctor Who, "Nightmare in Silver"
"Scale in Transformers is, not to put too fine a point on it, screwed. Virtually no era, franchise, fiction, toyline or other incarnation of Transformers has presented scale in a logical or believable fashion."
—TFWiki.net, "Scale

"Space. It's huge. So huge, in fact, that if you'd lost your car keys in it, they would be almost impossible to find."
— Captain Qwark, Ratchet & Clank Future: A Crack In Time (ironically, a major offender in department of distance)
"It could blow a hole in the space-time continuum the size of—!! (glances at monitor, deflates a little) well, actually, the exact size of Belgium. [sighs] That’s a bit undramatic, isn’t it? Belgium?"
— The 5th Doctor in full lampshade mode
Rory: (when about to crash into a star) Can't we just call for help?
The Doctor: Yes, because the universe is really quite small and there's bound to be someone nearby.
— Doctor Who, "Amy's Choice"
"By way of summary, the 115,128 networked, civilized star systems of the 31st-century Milky-Way Galaxy (population: 10,283 trillion and four. No... wait. Five. Err... three. Crap. Hold still.)"
— Schlock Mercenary, April 15, 2002

"Space is not really big. Space is just something to be big in."
— Terry Pratchett, The Light Fantastic
Jonas: The actual answer is slightly more than one atomic mass unit. Slightly more than one atomic mass unit.
Emma: Wait a second! That's not even a real answer. "Slightly more?" That's... I gave-
Jonas: Well, that's all for this week!
Emma: Wait, I gave one sixteenth of a pound! "Slightly more" is vague!
— lonelygirl15, "Emma's Choice", on the mass of a proton
"Anyway, fantasy cartography is a pet peeve of mine; i think most fantasy cartographers forget that peasants and armies on foot can't travel a hundred miles an hour."
— D.Archon, rpg.net
"Clearly, the pitiful humans at Hasbro are so overwhelmed by the awesomeness of Cybertronian life forms that they can't get the scale right."
— Starscream, Transformers Comic issue 23
"Ayup. Yes indeedy. Yuup. N-nothing. Lots and lots of n-nothing!"
— One of

random communication lines in Vega Strike (LIHW faction).
"We can't search this whole planet on foot!"
— Captain Kirk, Star Trek: The Original Series, "The Man Trap"
"When we showed George Martin The Wall," says lead designer Sylvain Sechi of introducing the books' author to the giant, miles-long icy structure/metaphor that protects the land of Westeros from the wildlings (and worse) that lurk up north, "he says ‘that’s a very, very big wall." Upon their explaining to him that they'd made it to scale according to his description, he replied that "I wrote it too big!"
— Game of Thrones videogame lead designer Sylvain Sechi, as quoted in Rock Paper Shotgun
"Seriously, one of the things that is very, very difficult to portray when writing anything involving Space is the truly ridiculous distances involved in anything. Let me give you a rundown of things:

(Picture of the moon) This is the moon, it is the closest celestial body we have. it is, on average, 384,400 kilometers away. This is a distance equivalent to nine times the circumference of the Earth, more or less. To give you an idea of how fraking huge this distance is, it would take you eight or nine years to walk this far, and only if you were some magical automaton that didn't require eating or sleeping. On a car doing 100 Km/h, this would take 160 days (and a bit).

And keep in mind that we're talking about the fraking moon, which on cosmological terms is roughly equivalent to shuffling about in your seat slightly.

Next on our list of absurd distances is this: (Picture of the sun) This is the sun, our closest star. It is 1.392.000 kilometers wide, or three times the distance between the Earth and Moon. If the Sun were the size of a soccer ball (22 cm in diameter), then the Earth would be about two milimeters wide.

It is about 149,600,000 kilometers away. If it were the size of a soccer ball, then the Earth would be 23.57 meters away. If you were on an SR-71 Blackbird traveling at its fastest official speed (3,529.6 Km/h), it would take you 15 years to get there. It takes light, the fastest thing known to man, eight minutes to get here from the Sun. We refer to this distance as an Astronomical Unit, or AU, since kilometers are too damned small for anything inside the solar system.

Finally, we have this thing: (Picture of a tiny dot of light) That thing, that fraking thing, is Eris. It is the largest dwarf planet discovered, and currently holds the title of the farthest planetary body in our solar system. How far away is it?

At its closest? 37.77 AU, or 5,650,000,000 km. Holy fraking horseapples. If you so desired to make the journey on the previously mentioned SR-71 Blackbird, it would take you 566 FRAKING YEARS. If you wanted to get there today, you'd have to have left during the Battle of Varna.

And I'm not even going outside the solar system, which on cosmological terms is roughly equivalent to one's house. No wonder SoaSE ships go into FTL for in-system travel."
— Dalek Ix, author of Friends of a Solar Empire, in a blog entry.
Captain Patterson: But at its closest Venus is 26 million miles from Earth! You don't just accidentally land on a planet 26 million miles away!
Professor Konrad: That's what I would have said. But it appears all things are possible in space.
— Queen of Outer Space