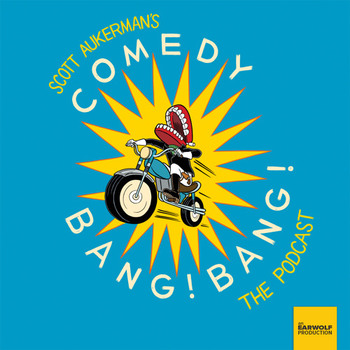 Comedy Bang Bang, formerly Comedy Death-Ray Radio, is a radio show-turned podcast hosted by Scott Aukerman. Released weekly, the show started off as a straight interview with two or more comedic guests such as "Weird Al" Yankovic or Thomas Lennon, but quickly grew to incorporate characters, sketches and live music. As a veteran writer on shows such as Mr. Show and the host of UCB theatre's Comedy Death-Ray live show, Aukerman's guests regularly include comedians like Paul F. Tompkins, Sarah Silverman and Bob Odenkirk. Sometimes they appear as themselves, sometimes they are pretending to be someone else.

The show is well regarded as the cornerstone of comedy podcasts, often crossing over with shows like Doug Loves Movies, Nerdist Podcast and Never Not Funny. It has spawned a TV show.

Available through the iTunes Store or directly from the Web site

The podcast contains examples of: