Pinball / No Fear: Dangerous Sports
aka: No Fear 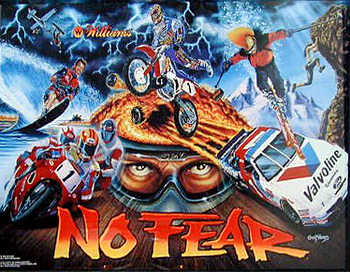 Just Add GUTS
Skull: "Prepare for the ride of your life!"
Advertisement:

No Fear: Dangerous Sports is a 1995 pinball game designed by Steve Ritchie with art by Greg Freres. It was released by Williams Electronics and is based on the "No Fear" clothing line.

For those unfamiliar with the brand, No Fear is based on extreme sports and racing, and the pinball game features appearances by motocross racer Jeremy McGrath, skiier Glen Plake, NASCAR racer Robby Gordon, water skiier Sammy Duvall, and climber Dan Osman. Go over the edge, jump the ramps, shoot the tubes, race on the asphalt, loop the summit, and freefall out of an airplane. For a bigger rush, scream through the playfield accelerator to build up speed, then try to make it across the ramp. After you've gone through all of that, take on the Major Challenges to show what you've really got — all while Skull the Bone Head keeps taunting away.

A digital version was available for The Pinball Arcade until the license for all Williams and Bally tables expired on July 1, 2018.

The No Fear: Dangerous Sports pinball demonstrates the following tropes: