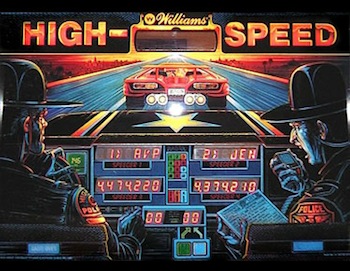 High Speed is a pinball game designed by Steve Ritchie, with software by Larry DeMar and art by Mark Sprenger (playfield) and Python Anghelo (backglass); it was released by Williams Electronics in 1986. The game is based on a high-speed police chase between the player (in his cherry-red Lamborghini) and the long arm of the law. The player must first advance a set of traffic lights from green to yellow to red; after he runs the red light, the police will immediately follow. If the player escapes, he can start three-ball multiball for a chase at breakneck speeds, complete with flashing lights and siren.

the first Williams pinball with alpha-numeric displays, the first pinball to dynamically adjust match percentages and replay score values, the first solid-state pinball with detailed diagnostic reports, and the first game to detect and compensate for broken switches on the playfield. Even without these features, it is fondly remembered by numerous players for its adrenalin-pumping action and fast gameplay, a sterling example of why Steve Ritchie is considered "The Master of Flow". This was the most popular pinball of 1986 with over 17,000 tables sold.

A video game version for the Nintendo Entertainment System was developed by Rare Ltd. and published by Tradewest. To the detriment of purists, it added video-only obstacles, such as a mad mechanic who attempted to slap the ball down the flippers. After over twenty years, a true recreation of the game without extraneous features was made available for The Pinball Arcade, only to be taken down when FarSight Studios' license to all Bally and Williams tables expired on July 1, 2018. 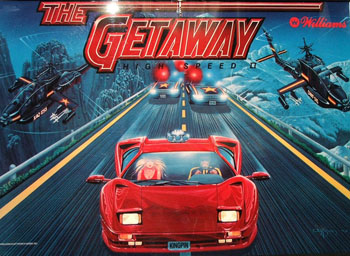 The Getaway: High Speed II was a sequel designed by Steve Ritchie, with software by Dwight Sullivan and artwork by Mark Sprenger (playfield) and Doug Watson (backglass), and released in 1992 by Williams. Once again, the player hits the highways in his souped-up sports car, and once again, Car 504 is on his tail... and he's bringing reinforcements.

The game features a magnetic Supercharger on the playfield that accelerates pinballs around an upper loop, building up speed before returning it to the player. A gearshift allowed the player to change gears, and judicious shifting is needed for higher scores. The table also features ZZ Top's "La Grange" as the main theme music.

A video game version for the Nintendo Game Boy was developed by Unexpected Developments and published by Williams. Another video game version of the table was available for The Pinball Arcade, which was accidentally revealed earlier than expected due to a in-game bug within the PC version. However, in the case of The Pinball Arcade, the expiration of the Williams/Bally license in July 2018 made it a legacy table and thus unavailable except to those who purchased it before that month. However, on September 4, 2018, Zen Studios announced that it had gained the rights to this and other WMS tables to be released within Pinball FX3. In particular, this and three other tables (Fish Tales, Medieval Madness and Junk Yard) are the first to get this treatment.