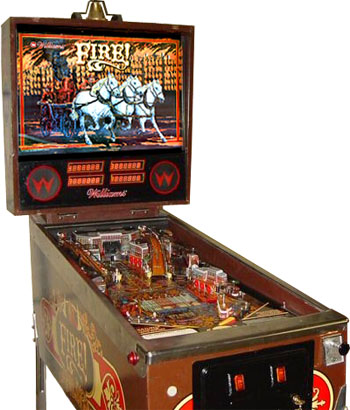 He's on fire!
Woman: "Save my Baby!"
Advertisement:

Fire! is a Physical Pinball Table released in 1987 by Williams Electronics. It was designed by Barry Oursler with artwork and models by Mark Sprenger.

Loosely based on the Great Chicago Fire of 1871,

this game directs the player to save the city and stop the various fires consuming the playfield. As the lights flash and the flames roll and flicker, hit the various targets to save the Saloon, the Bank, the Harness Shop, and other buildings from going up in smoke. Climb the two fire escapes to save helpless victims, and shoot the horseshoe to activate the hydrant for some extra help. Lock a ball on the second story, raise the Hook and Ladder, then rescue the fireman trapped on the top floor to start a five-alarm multiball while the brass bell rings away.

Fire! is remarkable for its unconventional theme, symmetrically looped layout, and stunningly detailed artwork and models. Like a real fire, this game is deceptively simple, ready to burn careless players at a moment's notice. Nearly 8,000 tables were made, in both standard and "Champaign" editions; not too surprisingly, this game is extremely popular with real-life firefighters and collectors of firefighting memorabilia.