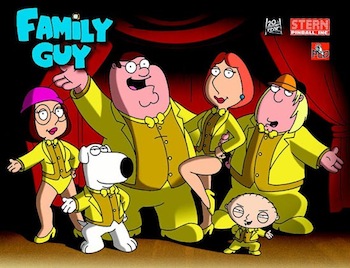 "Victory shall be mine!"
— Stewie Griffin
Advertisement:

Family Guy is a Physical Pinball Table designed by Pat Lawlor, programmed by Keith Johnson, and released by Stern Pinball in 2007.

Based on the popular animated show by Seth MacFarlane, the Family Guy pinball game takes players through the memorable misadventures of the dysfunctional Griffin family. Fight the crazy monkey in Chris' closet, help Stewie start a Sexy Party, hit Brian's beer can to bring about Happy Hour, and get Peter into a Chicken Fight over a coupon. As you progress, Stewie will get to play his own mini-pinball machine, all part of his plan to take over the world — starting with your table. The gameplay is accompanied by numerous voice clips from the show, supplemented with additional dialog by Seth MacFarlane.

A modified version of this game appeared on ABC Television's Good Morning America on January 18, 2008, as part of a segment commemorating the 60th Anniversary of Pinball.note More accurately, the 60th Anniversary of the electro-mechanical flipper, as debuted on Gottlieb's Humpty Dumpty The TV Modes were replaced with GMA segments, and the Griffins were swapped out with photos of the show's hosts. The "Good Morning America" pinball machine currently resides in the Green Room of ABC's New York City studio. 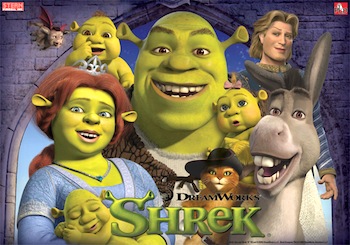 The Griffins, reimagined.
"You should warn somebody before you do that. I had my mouth open and everything!"
— Donkey

A few months after Family Guy came out, Stern Pinball released Shrek, based on the first three films in the series. It was a rethemed version of Family Guy, allowing Stern to sell the same game to a wider audience, particularly in Europe (where Family Guy was not as popular).

In terms of gameplay, Shrek and Family Guy are exactly the same — the changes were to the artwork, sound effects, and jokes. Some owners have even installed Shrek game ROMs into their Family Guy machines to get two titles in the same cabinet (or to mess with unsuspecting players).