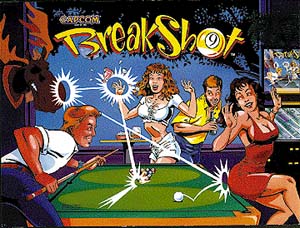 Breakshot is a physical pinball table released by Capcom Coin-Op in 1996, designed by Greg Kmiec with artwork by Stan Fukuoka. The playfield deliberately hearkens back to the design philosophies of the electro-mechanical pinball machines of the '70s, with a single-level playfield and total ball visibility at all times. The object of the game is to complete 3 games of pool - Eight Ball, Nine Ball and Rotation - in order to start Cutthroat Countdown, a high-stakes pool game where each ball is called out in order; each ball you sink is worth 1M points times one plus the number of times Cutthroat Countdown has been successfully completed (maximum 3M) and the mode ends with a shot at a Super Jackpot worth twice the value of the balls you sank before either running out of time or sinking all the balls. Balls can be sunk in several ways; you can hit their affiliated target on the playfield, shoot an orbit with a lit Super Cue, shoot the center pockets or make the undocumented skill shot (soft plunge the ball to the upper flipper, then shoot the Bank Shot lane to score 100K and sink a ball).

The main gimmick, or "toy", of the game is the center pockets area, a set of three saucers behind a retractable post. When a ball is shot into the center pockets area, the post rises and the ball falls against it, thus making it into a captive ball; if a ball was previously locked, then it will be released from the center pockets and join the second ball on the post. You must then hit the post, which will hopefully transfer enough force to the ball(s) to send them into the center pockets, thus locking one or both of them. There are 2 multiball modes: Ball-O-Rama, a 2-ball multiball started by shooting the 8 Ball saucer while you have exactly one captive ball, with its jackpot at that same shot, and Breakshot Frenzy, a 3-ball multiball started by locking all 3 balls in the center pockets, with its jackpot at the center pockets and a Super Jackpot after scoring three jackpots. Multiball is an essential component of putting up a good score in Breakshot, as all non-jackpot scores are multiplied by the number of balls in play, including sunk balls in Cutthroat Countdown.

Overall, Breakshot is well-regarded by pinheads, though it does sometimes come in for criticism due to its somewhat feature-light gameplay and a relatively weak sound package relative to its WPC-95 contemporaries. The main complaint, though, is the unbalanced nature of the scoring, with Cutthroat Countdown drowning out everything else if the player does well enough. Still, this is a good machine for both novices and experts, as the former can enjoy a relatively simple pinball game, while the latter can test themselves to see how lucratively they can score during Cutthroat Countdown.

Tropes found in Breakshot include: