A part of what makes up a majority of a functional society is the prospect of coexistence and acknowledgment of those beyond one's self. As a result, socialization has become one of the most important and primordial concepts that an individual adheres to because when gathered with a like-minded collective of figures, they can work together to accomplish and establish a brand new construct of unity, rules, and relations that can pave the way for a bride to a heightened sense of understanding with one another. With those in mind, it seemed inevitable that groups would persevere in history and give way to some of the most successful implementations that society would take precedence under, with the scope widening to include different sorts of cliques with their own interests, goals, and beliefs. Thus, is the expansion and legacy of communities and the definite labelings of what one would call a society.

Regardless of the everlasting importance and presence of communities, the idea and feeling of being alone and on one's own has remained consistently strong and persistent. In fact, it's managed to adapt and find itself getting used to its inverse archetype with many individuals not only still feeling alone after seeing and knowing of the main functions of a group, but also actively choosing to be on their own for varying reasons. This does not deter the growth of groups, yet is an indication of the increase of loneliness and both ends have contributed to large changes with multiple benefits and disadvantages provided by each other. Even so, both of them have contributed to the neverending expansion of society as well as the thoughts and beliefs of everybody in some shape or form depending on what form of socialization have they undergone.

The House of Communities and Solitude is one of the larger Houses in the Pantheon and it serves as a major centerpiece of historic and cultural importance throughout the realms. True to its scope, it managed to establish bridges and rifts towards various different Houses in the Pantheon as many figured that a brief migration would mean that they were to be given an invite to multiple gatherings of sorts where they could enroll and advocate for their groups and communities and establish their presence with a fair agreement. This meant that the House was to serve as a medium regarding relations and communications with all the other domains, which naturally meant that the other Houses were to depend on this one in some way or another. As a result, a massive radio tower was established in the center, followed by eight smaller, yet still tall towers as an extension to reach out and keep in tabs with the other Houses. There are some exceptions, such as the Houses of Slaughter, Hatred and Rancor, and Villainy, the former due to its metallic thick stench being potent enough to disrupt radio communication and the latter two due to their innate hostility and lack of cooperation with the House. That said, other Houses have decided to keep an eye on them and report it to the House of Communities and Solitude as a way to make up for it.

This House has some of the most intricate and designs in the Pantheon, with buildings and centers established in neat rows and in specifically designated places that allow them to stand out from a good amount of distances. Many of the services provided in the House are very much centered around group establishments and setting up crowds for different sorts of individuals to commute and interact with as a way for the Pantheon's residents, deities, or mortals, to connect and understand with one another. There is also a large center that serves as a gala for various events to be held and has held a reputation as one of the most versatile places in the Pantheon due to its sheer size, amounts of venues, and the many occupations that it could contain. It's become a central spot for what's come to be known as "hybrid events" that tend to be sponsored and hosted by the House of Communities and Solitude as well as two other Houses via combining their main themes to showcase just what two Houses can deliver together. Reasonably, the center, formally known as Exposição Grand Expansenote Portugese for Grand Expanse Exhibition, has become the main attraction for the House and remains one of the most popular areas regarding gatherings and viewings in the Pantheon.

On one end of the House is a very open field with just a few buildings and shelters established on far distances as well as a beacon that specifically ties in with the House of Despondency. This happens to be the primary domain for the lonely and those seeking solitude and many were quick to notice that its general structure and mood was quite similar to the House of Despondency, though there was a major difference in that there was a social center at a corner where deities would usually group up at and converse with one another at. It serves as a therapy center for them, though it's also been reported that many deities from other Houses like to pay a visit there if mainly to spend some time self-reflecting on their past and actions. Not everyone there is sad and mopey, mind you, and despite the emphasis on being one, this segment of the House is actually a lot more popular than one might expect. As a result, mandates have been established to limit the number of visitors that attend the solitary space. After all, everybody needs an "alone time" at some point.

The Stalwart Crowds of Unity 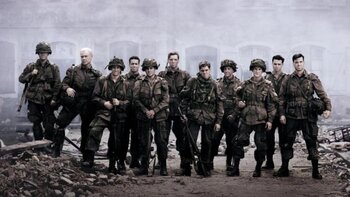 Just a few of the Company's large roster of members.
"Grandpa, were you a hero in the war?"

"No, but I served in a company of heroes." 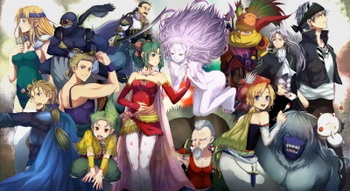 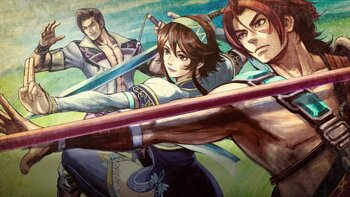 "The surf's going to get rocked!"

The Blessed Collective of Loneliness 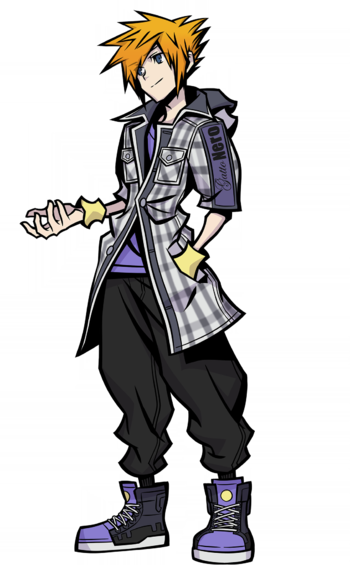 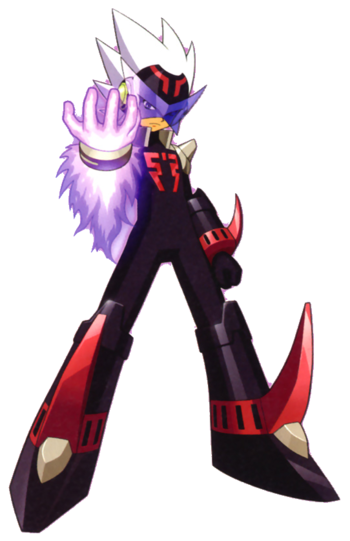