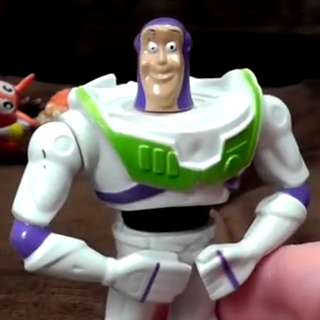 "Buzz Lightyear to the rescue! Or more sort of a Herp Lightyear..."
"Starlight though... what the hay? I think that's actually Starlight's weird otherwise-unseen cousin trying to impersonate her and failing, or maybe a Changeling that's having an off day. Other releases of her are downright awesome, so why does this one look so wrong?"
— An internet comment on this Starlight Glimmer toy

◊ (note the unicorn on the box, which its colors barely resemble)
Advertisement:

With most countries flourishing in the free market, they sell a truckload of toys to tiny tots and toddlers everywhere. However, for every well-modeled Transformer, there will be a few misshapen ones to take its place for a cheaper price. Whether they have flimsy plastic, terrible paint jobs, if they were outsourced from a decrepit factory, or maybe they were apathetic... here are some toys that will ensure your children will have nightmares tonight.