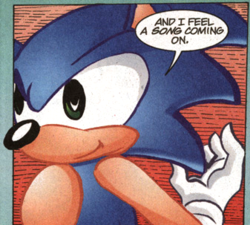 "I also feel my arm twisting abnormally! Help me."

It's actually fairly common for comic books to stray from the model. Even in the same line of comics, one artist's style might vary from others', and some might draw the same character with different proportions. For example, someone might draw Superman as an enormous bodybuilder, where others might draw him with a build more akin to Christopher Reeve. Either way, sometimes it might work, other times, well...