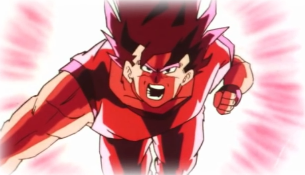 Goku's power level grows, but his face continues to shrink.
"This is supposed to look like a camel."
— China leans on the fourth wall while showing his Emperor various animals, Hetalia: Axis Powers
Advertisement:

A character from Ninja Nonsense once said that sometimes an anime's animation is superb at the first and last few episodes and severely drops in quality in the middle. As these examples show, he was definitely right.

It's worth noting that a lot of well-animated anime (or individual high-budget episodes of otherwise cheap shows) tend to feature looser artwork than usual in select scenes, as a way to show off the style of each individual animator and give said scenes more of a "soul", so to speak. These inconsistencies as a result of animation directors treating individual animators as artists as opposed to mere cogs in a machine is often seen as "low quality" or "lack of budget" by anime fans, who tend to value detail-per-frame and consistency above all else.