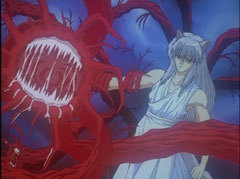 Kurama reminding everyone to Beware the Nice Ones.
Advertisement:

As much as YuYu Hakusho is a shounen series, Yoshihiro Togashi was inspired by H. R. Giger (the artist who designed the titular Xenomorph Aliens), and the '90s was a grand time for Darker and Edgier anime. The series' debut came out at a time when lighting helped give '90s anime a gloomy and airy effect for atmospheres, and considering Yu Yu Hakusho's themes of the supernatural, eldritch, and infernal, the series does not skimp out on the Nightmare Fuel.