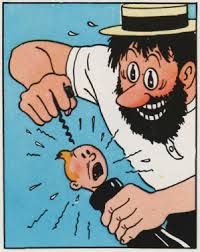 Haddock trying to dissect Tintin. Sweet dreams.
Advertisement:
open/close all folders
Tintin in America
Cigars of the Pharaoh
The Blue Lotus
The Broken Ear
The Black Island
The Shooting Star
Red Rackham’s Treasure
Prisoners of the Sun
Destination Moon
Explorers on the Moon
The Calculus Affair
Tintin in Tibet
Flight 714