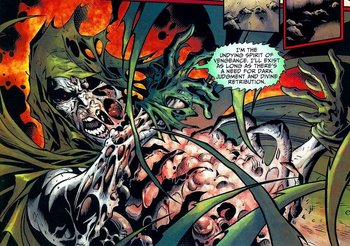 Never mess with the Wrath of God
Considering the Title Character goes by The Spirit of Vengeance you can bet there's an endless well of Nightmare Fuel to be gained from him. Put it this way. In the Silver Age, his entire shtick was killing people without actually killing them.That's when he's just tethered to a human host. Check out these highlights