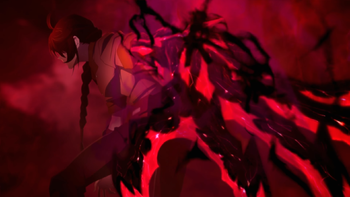 And she's the hero of the story.
Berseria might just be the most Nightmare-Fuel heavy of the Tales series to date. note  It surpasses Tales of the Abyss in this regard and that is saying something. A darker story, more sinister characters and morally grey, and a fair bit of Body Horror to boot.