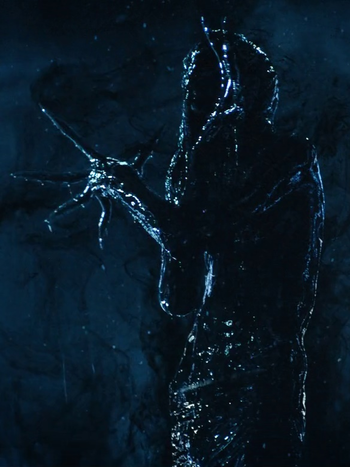 Turns out there's a very good reason Saru wanted to leave his planet. Not pictured: the glowing red eyes.
"The cosmos has lost its brilliance, and everywhere I turn... there's fear."
—Michael Burnham

As a TV-MA Darker and Edgier Star Trek show, Discovery is shaping up to continue the Star Trek tradition of treating the galaxy as a mix of amazing wonders and terrifying dangers.

"Battle At The Binary Stars"

"Context Is For Kings"

"The Butcher's Knife Cares Not for the Lamb's Cry"

"Into the Forest I Go"

"What's Past Is Prologue"

"Will You Take My Hand?"

"An Obol for Charon"

"The Sounds of Thunder"

"In the Valley of Shadows"