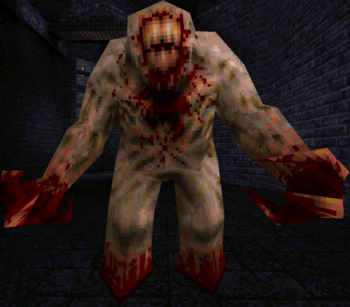 My, what big teeth you have.
It's a game whose main influence is H. P. Lovecraft works. What else did you expect? Even though you're armed to the teeth with weapons, you'd better use them well or be torn apart by the horrors of the Quake worlds.

Moment pages are Spoilers Off by default, so the different moments have been folderized as a security measure. Proceed with caution. You Have Been Warned.

open/close all folders
Enemies
The blocky, low-polygon enemies along with their jerky, stop-motion esque movements and some having malformed appearances can make them unnerving.
World of Quake
Other