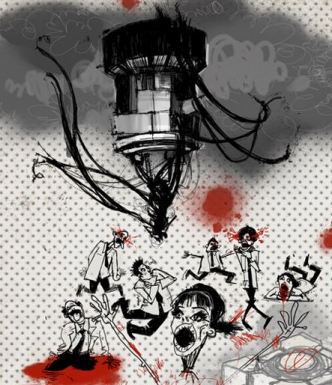 Before you start believing every insane mantra you see scribbled on the wall, I should mention that a few of my former test-subjects went a little...crazy. In non-test related circumstances.
Advertisement:

Despite the witty, sarcastic humor of the writing, digging beneath the surface of Portal will reveal a world of deranged insanity. Trust us, Aperture Laboratories isn't all sunshine and daisies.

NOTICE: This is a Moments subpage for the Portal series. There are major spoilers beyond this point, all of which are unmarked as per policy. Venture further only if you dare! You Have Been Warned.

Advertisement:
GLaDOS: Okay. I'm not kidding now. Come back or I will kill you.
GLaDOS: You're not a good person, you know. Good people don't end up here.

GLaDOS: I've been really busy being dead. You know, after you murdered me.