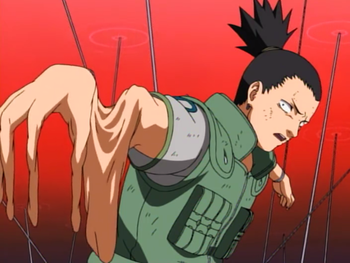 Ah, Naruto. No wonder you're so popular. You've got it all. An abundance of Bishōnen and Bishoujo, moments that either make us melt our hearts, laugh out loud, or leave us tearing up inside, so many examples of pure AWESOMENESS, cool villains and heroes, and yes, even badass and (probably mostly) likable and well-developed characters.
Advertisement:

Now, if only some of your content wasn't so friggin' scary, we'd all probably be getting a lot more sleep...

Warning: Every SPOILER from the manga is unmarked. Read at your own peril.
Kakashi Hiden
See Kakashi Hiden Lightning In The Icy Sky
Shikamaru Hiden
See Shikamaru Hiden A Cloud Drifting In Silent Darkness
The Last: Naruto the Movie
The last story of Naruto Uzumaki... is love.
See The Last: Naruto the Movie
Sakura Hiden
See Sakura Hiden Thoughts Of Love Riding Upon A Spring Breeze
Konoha Hiden
See Konoha Hiden The Perfect Day For A Wedding
Gaara Hiden
See Gaara Hiden A Sandstorm Mirage
Akatsuki Hiden
See Akatsuki Hiden Evil Flowers In Full Bloom
The Day Naruto became Hokage
Naruto Gaiden: The Seventh Hokage and the Scarlet Spring Month
A spin-off miniseries about the next generation of ninja, the children of the Konoha 12. It focuses on Sarada Uchiha, who finds herself having questions about her family.
See Naruto Gaiden
Boruto: the Movie
A spin-off movie focusing on Boruto Uzumaki and his quest to surpass his father, the legendary hero and Seventh Hokage, Naruto.
See Boruto: Naruto the Movie
Boruto: Naruto Next Generation
A spin-off sequel focusing on Boruto Uzumaki that takes place before and after the events of Boruto: Naruto the Movie.
See Boruto