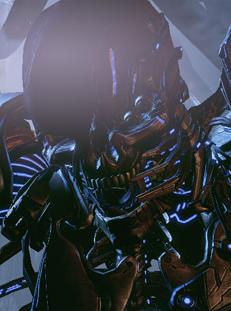 That thing's body? You're the construction materials.
"The Reapers are just a giant nightmare factory that never ends."
— Garrus Vakarian, Mass Effect 3
Advertisement:

The Mass Effect series is a science fiction adventure that takes players on a fantastic journey, visiting all the wonders (and dangers) of the galaxy. However, this doesn't mean there won't be some absolutely traumatizing events that might mentally scar you for life, especially since the the main villains take the plot to Cosmic Horror Story levels. Here you can find some of the most frightening and pants-wettingly terrifying horrors of the years 2183-2186.