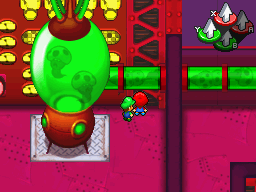 The second, oft-overlooked installment of the Mario & Luigi series may retain the trademark wit and comedic antics fans have come to expect from Mario RPGs, but one thing the game is also well remembered for is for its surprisingly gloomy tone, in sharp contrast to what is expected from Nintendo's most iconic world, most often cited as the single darkest game starring the portly plumber to date second only to the third Paper Mario game. Those looking for a bright and sunny Mario game may wish to look elsewhere.