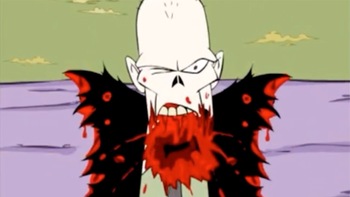 A zombie with plenty of flesh wounds.
Advertisement:
open/close all folders

Lobo is rated TV-MA for a lot of reasons. Tons of swearing, raunchy content and a boatload of graphic violence that can be unsettling.