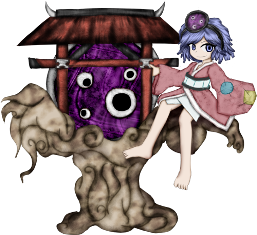 Aren't they an adorable Monster Girl (or boy)? Well, the mirror is the real monster and the child is just a (presummably dead) Soul Jar

Mugenri is far from being a hospitable place. The aforementioned amounts of bullets thrown at you, the possibility of death, the potential of some of these monsters and amoral sociopathic humans are just some of the many horrors that await you in the rural world that is Mugenri...