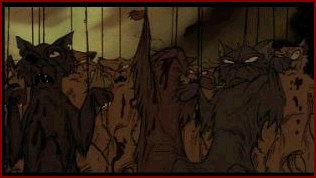 "The mouths of the reanimated dead emitted a gruesome, bloodcurdling howl that sounded like a burial march played backwards and became a whirlpool of sound. The hairs on my back stood on end like wire bristles. I was afraid I would lose my mind if I had to witness this insane performance any longer, but there was no escape..."

Felidae. With the plot of a Film Noir, it is obvious that the novels and the movie are not for kids. But even that belies just how horrifying it is at times...