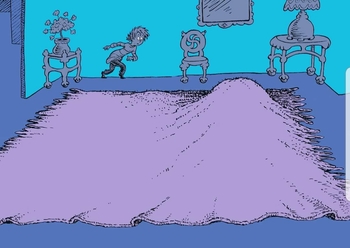 The only one I’m really scared of is that VUG under the RUG.

Just because Dr. Seuss' works really are meant for childrennote After The Seven Lady Godivas, that is. doesn't mean his books aren't devoid of Nightmare Fuel, especially not with his surreal art-style and settings.

Oh, the Places You'll Go!
So many examples from this book:
Adaptations and Other Media