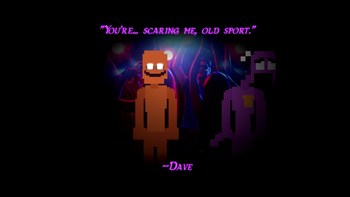 You know it's bad when even PURPLE GUY (albeit a Denser and Wackier version of him) is afraid of you.
Advertisement:

Despite its silliness, Dayshift at Freddy's has some pretty frightening content. To be fair, it's a Five Nights at Freddy's fangame, so it's bound to have at least some.

Spoilers Off applies to all Nightmare Fuel pages, so all spoilers are unmarked. You Have Been Warned!