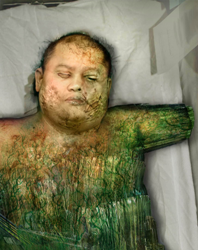 Although the series is generally quite campy, It does have its many moments of scary things that will put you off from playing a game or two for some time.