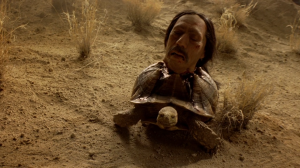 "What's the matter, Schrader?! You act like you never saw a severed human head on a tortoise before!"
Advertisement:

The drug trade is known for its violence and brutality towards innocents and criminals alike. But in the ruthless criminal world of Breaking Bad, with vicious and ruthless criminals in the region, everyone from cartel members to citizens should tread lightly. Very lightly.

As per Nightmare Fuel guidelines, all spoiler tags are unmarked!