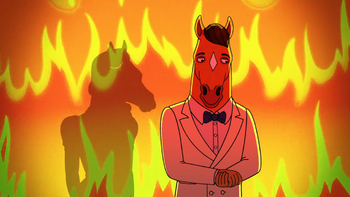 "I promise, one day, this will all be a pleasant memory."
"There is no shame in dying for nothing. That's why most people die."
—Henry Winkler about Herb's death, "Still Broken". Pretty good summation of the show's Primal Fear.

While Bojack Horseman has never been the kind of show that goes out of its way to scare the audience, it has had its fair share of scares. Given that the series is more than willing to show the darker side of celebrity and the desire to be remembered, a lot of scares come from more existential places.

open/close all folders
Season 1
The BoJack Horseman Story: Chapter One

What Time Is It Right Now

Season 5
The Dog Days Are Over

Head in the Clouds

Xerox of a Xerox

The View from Halfway Down