Where do you go to read the latest about new tropes?
What about old tropes with new names?
How can you find the best but least linked tropes out there?
Worry no more: Trope Report is here.
Advertisement:

Trope Report is a monthly newsletter that intends to showcase works and tropes from all corners of this website. It also aims to keep the troper hivemind updated with pertinent trope changes and discussions.

For Trope Report's November issue, we have pulled themes from National Novel Writing Month, Thanksgiving, National Princess Day, the Day of the Dead, and other seasonal observances.

Quite a few things have happened over the past month. We have a new namespace called DerivativeWorks/ for works in the public domain that have multiple works based on them. We also have a new policy page for Real Life Troping and an administrivia page for Notifiers.

Other notable changes are major TRS decisions that have completely overhauled well-established tropes like Paper-Thin Disguise, Cool Pet, Cowboy Be Bop At His Computer, Aluminum Christmas Trees, Armor-Piercing Slap, Authority Equals Asskicking and Asskicking Equals Authority. More info regarding those changes can be found in our Changelog section.

Works would be nothing without the people who make them. This section highlights authors, artists, actors, musicians, and everyone else responsible for trope creation and proliferation.
Image of the Month
This section brings you the best selections of the past month from Image Pickin'.This issue's featured image comes from Monster Maker III, and illustrates Status Effects. 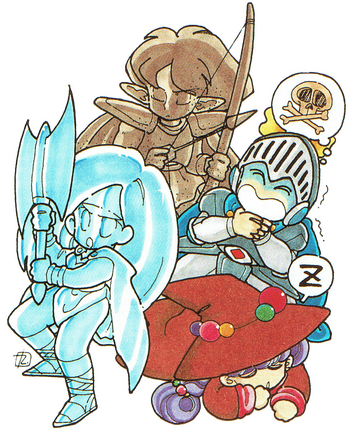 It's delightful to see a big trope finally be given an image. Awesome Music received one a few months ago, and even within this month, we had some popular ones like Most Wonderful Sound get one. But even though this wasn't a difficult trope to illustrate, this image won because it did it in a way that was very interesting visually.

Backstory time: the image comes from the manual

of an obscure RPG for the Super Famicom by the name of Monster Maker III, itself based on a popular card game franchise. This was back when games came with manuals to explain the lore and game mechanics, and this one in particular was very glossy, featuring a ton of original illustrations. The artist behind this all? A manga artist known as Kugatsu-hime

, who is responsible for all of the franchise's artwork.

Not a lot of Image of the Month winners get chosen through the Image Suggestion thread, but this one did. And even in a month where Big Bad—unarguably the biggest trope on the wiki—got a new pic, highlighting creators who would otherwise get lost in the shuffle is always such a treat that there was no way this wasn't going to win.

Forumwatch
Hey guys! Welcome back to Forumwatch! In this section, we'll be telling you about what's going on in the forums — interesting discussions that may be going on in Wiki Talk, some fun forum games, or lively debates going on in On-Topic Conversations, you name it!
Trope/Article Changelog
This section covers renames, removals, redefinitions, hard-splits, merges, and wick cleaning. We'll try to keep you alerted to any major changes to the site, including perpetual projects and Wiki Talk decisions that you may have missed, but if you want to be a part of the process that affects so much of our wiki, then head over to the Trope Repair Shop on the left-hand side of the forum.
Pages Needing Help
This section highlights articles indexed on the Pages Needing Wiki Magic policy page and sub-pages. Such articles are, at best, under-performing and below wiki standards. At worst, these pages are in violation of the wiki's rules against stubs. If you're an editor, try checking out some of these under-performing trope and work articles to see what improvements you can make to the page.
Project Spotlight
Looking for a project to dedicate some time to, but not comfortable jumping into large threads? Here are some smaller projects, or more recent discussions, in need of a few more hands.
Know the Contributors
This edition of Trope Report is brought to you by The Department of Death. The four-year Journey of the Soul is a perilous one, so why not put your money to good use and buy a travel package from us? Who knows, you might even be able to afford a trip aboard the Number Nine train!
Interested in becoming a contributor, or have suggestions for works or tropes to feature? Pop by the thread