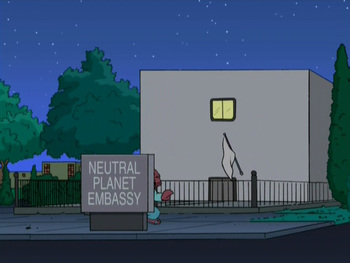 The Neutral Planet Embassy on Earth, circa 3004.

The Neutral Planet is a planet in the Neutral Zone. It is the homeworld of the Neutral People, who are led by the Neutral President. The planet's colour is consistently grey and its capital is Neutropolis.

Due to it being the absolute most neutral planet in the entire universe, it is chosen by many of the universe's largest governmental bodies as the best place to host its treaties and foster peace and end conflicts. In-turn, this is why lots of people who thrive on an "Us vs. Them" mentality tend to possess an irrational hatred towards the Neutral Planet and will frequently try to declare war on it. Being neutral, the Neutral Planet will stay on the fence in matters of interplanetary war.