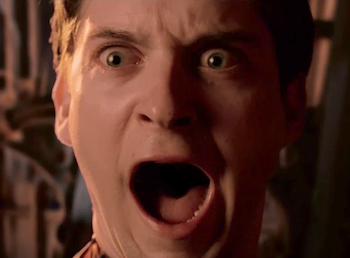 Being directed by the guy who made the Evil Dead movies (which aren't exactly crowning achievements of subtle horror), a lot of the trilogy's charm comes from Sam Raimi intentionally invoking the silly 60s style of the comics and the animated show, as well as ensuring that Spider-Man remains a Kid-Appeal Character mascot. These are the ones that didn't work. Or did. It depends on what you watch these movies for.

This film is infamous for being Narmy: