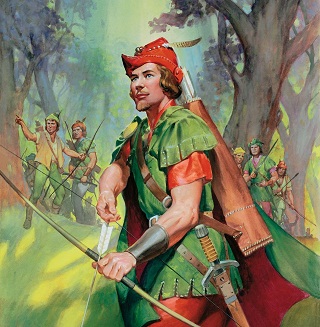 "Lythe and listin, gentilmen,
That be of frebore blode;
I shall you tel of a gode yeman,
His name was Robyn Hode.

Robyn was a prude outlaw,
Whyles he walked on grounde:
So curteyse an outlawe as he was one
Was nevere non founde."
— A Gest of Robyn Hode

Robin Hood is a mythical heroic outlaw first alluded to in William Langland's fourteenth century poem Piers Plowman, though the reference indicates he existed much earlier in oral tradition. The oldest surviving ballads featuring him all date from a century or so later; the Child Ballads include an entire book solely of Robin Hood ballads.

He is traditionally associated with Sherwood Forest in Nottinghamshire, though an important early ballad locates him in Barnesdale Forest in Yorkshire, and later ones as far afield as Scotland and London; a late ballad sets his birthplace as Locksley, a possibly fictional village in south Yorkshire or Notts. He is identified as a yeoman — a non-noble, free, small landholder — in his original incarnations. The Elizabethans would attribute a title of nobility to Robin as Earl of Huntingdon; several modern incarnations make him a knight (or at least a soldier) and treat the Crusades as some sort of medieval Vietnam.

Certain early elements of the legend, such as Robin's devotion to the Virgin Mary and his antipathy to the higher clergy, have largely dropped out, to be replaced by his charity to the poor (probably developed from the early statement that he did no harm to poor farmers, yeomen, knights, or squires) and his opposition to tyranny (likely derived from his opposition — entirely natural in an outlaw — to the local Sheriff). He is the Trope Codifier for much of the Archer Archetype, especially the association with nature and the rebellious personality. Many of the specific feats of archery associated with this archetype (most famously, Splitting the Arrow in two) are first seen in Robin Hood legends or modern adaptations. He's also known to be pretty handy with a sword and a quarterstaff.

It is unclear when Robin Hood first emerged as a character in folklore. The earliest ballad to give any sort of indication of a date (the Lytell Geste of Robyn Hode) is set during the reign of a quasi-mythical "Edward, our comely [i.e., handsome] king." Three kings named Edward ruled England between 899 and 1066, and another three in succession from 1272 to 1377 (allusions to the Robin Hood legends started appearing in other works, such as court documents and Piers Plowman during this second period), but none of these were ever known as "the Comely" — which is, in any event, a wholly conventional epithet not firmly attached to any historical figure. Another, later ballad names a King Henry and Queen Katherine (Henry V's queen was Catherine/Katherine (the spelling wasn't standardized at this point) of Valois, but no other King Henry had a queen named Katherine until Henry VIII); still others leave the monarch wholly anonymous. As such, there is no exact consensus on when the myth first came about, though most modern scholars place it somewhere between 1270 and 1350.

The possible inspirations for the myth are equally varied and unclear. While there is limited evidence that he may have been a historical figure, or at least named after one, the modern consensus is that he is a distillation of multiple figures — historical and mythical — from the early 2nd millennium. One of the most prominent is Hereward the Wake, a historical but somewhat mythologized individual dating back to the 11th century and the Norman conquest of England. While records of his life are limited and somewhat contradictory, it is generally held that he was an Anglo-Saxon noble who was exiled to Europe by King Edward the Confessor some time before the Norman invasion. He eventually returned to England a few years after the invasion, and joined in a popular revolt against William the Conqueror (a Roaring Rampage of Revenge for his murdered brother, according to legend) before escaping into the woods to live as an outlaw. In contrast, one late 19th / early 20th century theory held that Robin's legend is a remnant of pre-Christian pagan belief in some form of nature spirit, "Robin Wood" the "Spirit of the Forest". Nowadays this theory is not very favored in historic and folklorist circles although it remains influential in more mystical retellings.

Whatever the case, most modern retellings have settled on the Third Crusade as the time frame for the stories thanks to his portrayal as “Locksley” in Sir Walter Scott’s Ivanhoe, widely considered the most influential depiction of the character. It is worth noting, though, that Scott's work also popularized the use of the conflict between the Anglo-Saxons and Normans in the legend, which had more or less ended by the Third Crusade, so take your pick.

Whether or not any of these characters actually ever existed is debatable. (Well, except for King Richard and Prince — later King — John, who most certainly did. And King Edward in the earliest ballads. And King Henry and Queen Catherine in latter ones. ... while which number may be meant is difficult to determine, the king has never had a name that an actual king of England did not have. And there were, of course, many Sheriffs of Nottingham.) There is a grave where the remains of Robin Hood are allegedly buried on the Kirklees Park Estate

; the Prioress of Kirklees supposedly overbled Robin to his demise... And then there's another grave at the cairn of Crosby Ravensworth Fell

As an aside that someone, somewhere might possibly find interesting, Britons and Americans pronounce Robin Hood's name ever-so-slightly differently, with the emphases in different places. Americans often say "Robin Hood" (as a dactyl ¯ ˘ ˘, a stressed syllable followed by two unstressed), often slurred together to the point of sounding like one word, while the British say "Robin Hood" (as an anapest ˘ ˘ ¯, two unstressed syllables followed by a stressed one), definitely as two separate words. It may be to do with the way the "o" sound is pronounced.

Examples (in chronological order)
Robins by another name

Tropes which are ubiquitous in the original legends and most retellings: