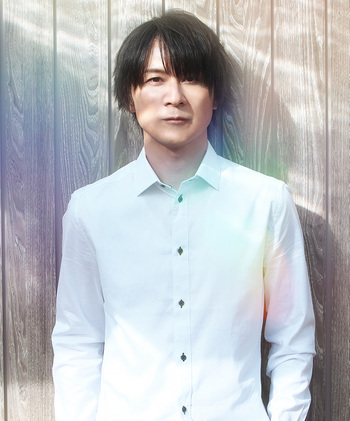 Yasunori Mitsuda (born January 21, 1972) is a Japanese video game composer who got his start doing sound programming work on games developed by Square (now Square Enix) such as Secret of Mana and Final Fantasy V, among others.

Originally, despite having been hired as a composer, he didn't do much composing (aside from sound effects), mostly working as a sound engineer. Naturally, he wasn't content with not being able to do what he applied for in the first place, so he threatened to quit unless he could do some actual composing. The result? Chrono Trigger's Awesome Music. Well, the majority of it, anyway — Mitsuda overdid his work and due to stress he ended up with stomach ulcers that prevented him from finishing it. In his place, veteran Square composer Nobuo Uematsu (who at the time mainly composed for Final Fantasy games) filled in, finishing the remaining ten songs.

Eventually Mitsuda recovered and went on to compose for several other Square games such as Chrono Cross and Xenogears, as well as broadening his work to other companies' games such as Hudson Soft's Bomberman 64: The Second Attack and Mario Party, Sacnoth's Shadow Hearts series, and Imageepoch's Luminous Arc and Sands of Destruction.

that works on various media, including his original medium, video games. Some of the non-game media he has composed for since founding this company includes Black Butler and Irina: The Vampire Cosmonaut.

Mitsuda is good friends with writer Masato Kato, whom he met while working on Chrono Trigger and who he has since collaborated with on Radical Dreamers, Xenogears, Chrono Cross, Deep Labyrinth, Sands of Destruction, Another Eden and an original album called Kirite.

Yasunori Mitsuda's composition style is very distinctive, invoking potent, deep moods with lots of flavorful zest. It becomes instantly recognizable to those who have heard enough of it. It also tends to be a treat to listen to again and again.

An article in Nintendo Power once mentioned that Mitsuda waits until a game is close to being complete before composing music for it. Given what happened with Mitsuda's own music with Singing Mountain in Chrono Trigger and the same game's second battle theme, not to mention the sheer amount of Cut Songs in video games with soundtracks by other composers, that may be why.