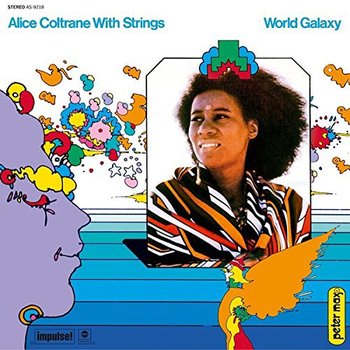 Around the cosmos in 40 minutes.
Advertisement:

World Galaxy is a studio album by African-American jazz pianist, harpist and bandleader, Alice Coltrane, released in 1972 on Impulse! Records.

Similar to her previous recordings, World Galaxy would see Alice furthering the tradition of "spiritual jazz" pioneered as early as John Coltrane's A Love Supreme. It would also find her experimenting more with classical music, seeing that this record would see her playing the harp as her primary instrument, but also the inclusion of a string section. Both of which also being from her previous work Lord of Lords.

World Galaxy (along with other records in Alice's catalogue such as Journey in Satchidananda) would be considered a pivotal record within the "spiritual jazz" movement, as well as the free jazz and third stream movements of the late 60s and early seventies. It's association with these genres being marked by her use of spiritual and mythological concepts and experimental compositional work.