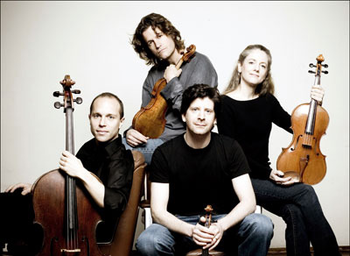 Vitamin String Quartet (also known simply as The String Quartet) are a collective of Los Angeles based string musicians and producers / strangers who record for Vitamin Records. Their albums typically focus on one band per album, and the covers are instrumental classical versions of that band's songs, note for note. VSQ has covered a diverse amount of artists. note  Tori Amos, Marilyn Manson, Alice in Chains, The Cure, Shania Twain, Muse, Led Zeppelin, Tupac Shakur, Madonna, Garbage, Aerosmith, Sade, Arcade Fire, Limp Bizkit, Avenged Sevenfold, Garth Brooks, AC/DC, Björk, Radiohead, Depeche Mode, Pink Floyd, Disturbed, Flaming Lips, and Metallica are just some of the musicians they have covered. If you like orchestral music, then you might want to check out their cover album(s) of your favorite bands and artists.