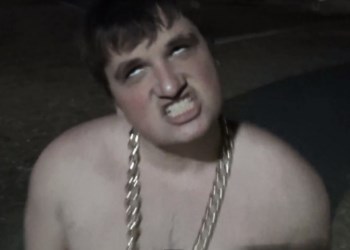 Gettin' the chedda, son.
I'm a big boss, self-made
Getting chedda, bitch I'm self-paid
'Till the grave, keep it flossin'
Rick Rossin', big bossin'
3PAC, "Do It Big Like Kony"

3PAC (1991-2015), formerly a benign rapper and producer going by the handles Silvaback and Ryan James was an Oakland, CA based satirical rapper, focusing on making music bad enough to make your ears bleed, primarily in the venerable Swag Rap genre. Outside YouTube, he was a student at San Jose State University and a member of his school's water polo team.

Starting in mid-2012 as the white homage to Lil B, he went on to create his own style and terminology, primarily referring to not giving a hoot (what did these poor owls ever do?) or ending every sentence with "son".

His early videos were widely disliked, with many people taking him at face value and assuming that he really was just a terrible rapper making outrageous boasts. As more people began to see his videos and understand his humor, however, he ended up developing an extremely loyal and dedicated underground fan base. His fans are usually referred to as the 3PAC Army or the Zero Hoots Gang.

In October of 2015, his career was abruptly and tragically cut short when he drowned during a water polo accident. He was taken to the hospital, but was eventually taken off life support when it became clear that he would never regain consciousness. He was 24 years old.

His fans continue to keep his memory alive on the internet. Much of his music and merchandise can be found here

3PAC's most notable tracks include: