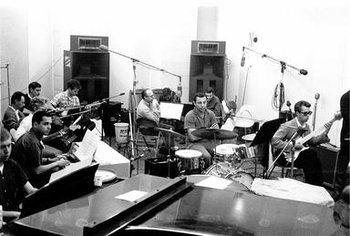 The Wrecking Crew was a loose collective of extremely prolific Los Angeles-based studio musicians. They began as Phil Spector's house band in the early 1960s and were instrumental in the creation of his famous Wall of Sound. They went on to become highly in-demand session musicians, playing on thousands of recordings in the 1960s and early 1970s.

Bands and artists that have worked with the Wrecking Crew:

Tropes associated with the Wrecking Crew: