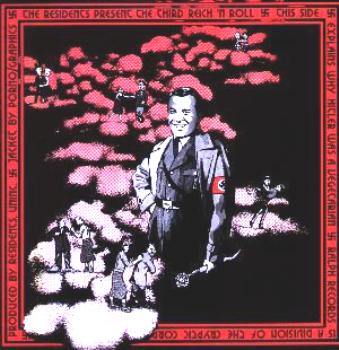 The Third Reich 'n Roll is a 1976 studio album by the American Avant-Garde Music band The Residents. It was released in 1976 to immediate controversy because of the Nazi imagery used on the album cover and in the lyrics themselves.

However, The Third Reich 'n Roll is a Concept Album poking fun at the Nazis. It features an absurd complot theory that the Nazis actually created rock 'n' roll to brainwash the youth.note Another interpretation is that the group REALLY pokes fun at conformity in pop music, comparing it to fascism/nazism. Still, the record is hardly flattering to Nazis. They supposedly did this through famous American Bandstand presenter Dick Clark, which explains why he is shown on the cover in a Nazi uniform. In line with this theory The Residents covered a handful of well known rock and pop tunes from the 1950s and 1960s and sang them in a German sounding voice with a lot of Teutonic noise and World War II imagery. Pure Nightmare Fuel to some, a hilarious Cover Album to others.

The album remains one of their most popular. It has only two tracks, "Swastikas on Parade" and "Hitler Was a Vegetarian", which take up the entire album. Many well known pop melodies can be recognized, though this not always easy.