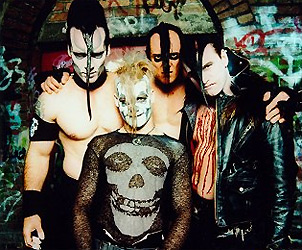 The Misfits are a Punk Rock band formed by Glenn Allen Anzalone Glenn Danzig in 1977 in Lodi, New Jersey. The line-up was constantly in flux for most of its existence, with its main members consisting of Glenn Danzig and the bassist Jerry Only. Eventually the classic line-up of Glenn, Jerry, Doyle Wolfgang von Frankenstein (Jerry's younger brother) and Arthur Googy was settled upon to record Walk Among Us.

The band made a distinct sound combining the buzz saw guitar of Buzzcocks with lyrical content mostly about B-Horror movies, Pulp Novels, and trashy pop culture in general. They are the progenitors and still reigning kings of Horror Punk.

The Misfits are commonly considered one of the most influential underground bands of their generations; laying the groundwork for continuing trends in Punk Rock, Goth Rock, Thrash Metal, and Post-Hardcore style Emo (especially My Chemical Romance who share the same fascination with horror and the undead, but apply it in a much more emotional and theatrical way).

On May 12, 2016 it was announced that Glenn Danzig, Jerry Only, and Doyle Wolfgang von Frankenstein will perform together for the first time in 33 years in September 2016. Since then, they've been playing together alongside new members Dave Lombardo and Acey Slade whenever they have any free time, and Jerry has stated he's open to making an album.

Not to be confused with one of the two Fake Bands from Jem. They also have nothing to do with the final film Marilyn Monroe (and Clark Gable) made (though that's where they got their name from.)

Current members in bold. Members who performed on a full-length studio release in italic.

"Mommy, Can I Go Out and Trope Tonight?:"

But the actual correct lyrics, according to LotLH are: