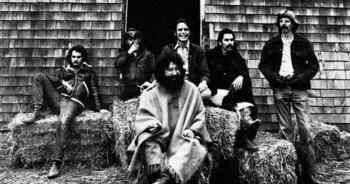 The Grateful Dead were a six-piecenote Well, most of the time; there were brief periods where they were a quintet, and one 5-year-long stretch when they were a septet group formed in San Francisco in the mid-1960s, best known for their improvisatory style of rock music, taking elements of Psychedelic Rock, Country Music, Folk Music, Blues, and whatever else they thought would fit. Essentially, they were the godfathers of the Jam Band genre. The Dead appeared at the now-famous Monterey Pop Festival in 1967, and the even more famous original Woodstock festival in 1969 (however, band members admit they weren’t at top form at either one), and have a reputation for long tours and musically exploratory shows where one song often blends into another.

The core line-up was Jerry Garcia (lead guitar), Bob Weir (rhythm guitar), Phil Lesh (bass), Mickey Hart and Bill Kreutzmann (drums — yes, two drummers, folks!) and a succession of keyboardists starting with Ron “Pigpen” McKernan and continuing, in order with Tom Constanten, Keith Godchaux, Brent Mydland, Vince Welnick and — on occasion — Bruce Hornsby. Godchaux's wife Donna Jean also joined the Dead as a backing vocalist shortly after he did, and they both left the group together to be replaced by Mydland. Aside from the keyboardists, whose tenures sometimes overlapped into a dual-keyboards lineup, the band's membership was largely stable between 1967 and its split in 1995.

Garcia and Weir were the primary vocalists in the group and were as different as night and day; while Garcia had a wispy, almost fragile sounding voice, Weir was best known for some of the group’s most raucous rock and roll “shouters” and his fondness for “cowboy songs”. Lesh, McKernan, Donna Jean Godchaux and Mydland all acted as additional backing and lead vocalists where needed.

Most of the band’s songs were collaborations between Garcia and lyricist Robert Hunter, though Weir contributed many as well, particularly with the help of lyricist John Perry Barlow. Hunter is considered to be an official member of the Dead, to the point where he was inducted into the Rock and Roll Hall of Fame with the rest of the band, while Barlow's official status is less clear. They also had an enormous library of covers, especially traditional Americana and blues, plus more modern country and rock pieces.

The Dead are probably as famous for their fanbase as they are for their music. The Deadheads, as they’re known, were so dedicated that many of them would follow the band on tour for extended stretches of time, and trade tapes of past concerts. This latter practice was encouraged by the group. Since the Dead never worked from a show-to-show setlist (they had a gigantic concert repertoire and are documented to have played more than five hundred different songs in their thirty-year existence, with around a hundred songs in rotation at any given time), trading tapes became to the Deadheads the ideal way to experience the music short of attending a concert live. Compounding this is that many consider the recordings of their songs from the original albums often pale to live versions of the same song, though some albums (notably, Anthem of the Sun, Workingman’s Dead, and American Beauty) are still considered classics. The Dead toured every year of their existence except 1975, drawing millions of fans, both hardcore touring “heads” and casual listeners across the country.

In spite of this cult popularity, the Grateful Dead were never quite as famous or mainstream as many of their peers of the period, which is exactly how the Deadheads preferred it. New fans came into the fold largely through word of mouth and the spread of those tapes. That is until 1987, when the band scored the sole US Top 40 hit in their long career, “Touch of Grey”, a catchy pop tune that had the odd side effect of turning their erstwhile cult into a stadium-filling circus for the rest of their career. This later period was a time of ups and downs, as the band was playing bigger shows than ever, but the influx of new fans led to some unfortunate incidents at shows. Keyboardist Brent Mydland died of a drug overdose, and Garcia’s own health and addictions fluctuated wildly until his death in 1995.

The band formally dissolved in the wake of Jerry Garcia’s demise, though members will occasionally reunite for special occasions, and they have performed under other names as The Band Minus the Face (e.g., The Other Ones, The Dead, Furthur, Dead & Company, etc.).

Culturally, outside of their music, the band’s most famous impact is arguably the Ben & Jerry’s ice cream flavor “Cherry Garcia,” the company’s best-selling flavor, which was briefly made with black cherries after his passing. Selected songs from their studio albums are also available for download in the video game Rock Band (incidentally, several programmers have expressed that Grateful Dead songs in particular are a serious pain to chart).

After Garcia’s death and the Dead’s disbandment, a band from Vermont called Phish, which had existed for about ten years and had already started to become popular with college crowds, became the de facto jam band for people to follow. Although Phish were influenced by the Dead, the two bands sound very different, as fans of either will point out. While both were primarily psychedelic rock bands, Phish were just as influenced by British prog-rock bands and Frank Zappa. In addition to Phish, the Dead inspired an entire second generation of jam bands, including Dave Matthews Band, Umphrey's McGee, Widespread Panic and The String Cheese Incident. The Dead also exerted a broader influence over the Alternative Country and Americana movements.

In 2015, Phish guitarist Trey Anastasio was chosen as Garcia's stand-in for the "Fare Thee Well" shows, billed as the last time Weir, Lesh, Hart, and Kreutzmann would play Grateful Dead songs together. They were accompanied by Hornsby and keyboardist Jeff Chimenti, a member of Weir's band Ratdog who had been the keyboardist for many post-Dead reunion bands. Even if the Fare Thee Well band never officially used the Grateful Dead name, they didn't discourage its use either, and the shows were almost universally referred to as Grateful Dead shows. The five sold-out stadium shows made Fare Thee Well one of the biggest concert events of 2015, earning acclaim, major media coverage and grossing over $52 million in ticket sales.

Dead & Company - which features Weir, Hart, Kreutzmann, Chimenti, Oteil Burbridge and John Mayer (Lesh having declined a spot) - is the current touring iteration of the group, having formed shortly after the Fare Thee Well shows. The new band has surprisingly defied early fan skepticism (largely due to the presence of Mayer) by becoming one of the most popular touring acts of the past few years and easily the most successful of the post-Dead reunion groups.

has a massive collection of live Grateful Dead recordings. The rights issues with the band’s music are sometimes complicated; as of early September 2017, audience recordings can be downloaded or streamed, while soundboard recordings can only be streamed.

There's also the Dick’s Picks series of retrospective live albums which (usually) feature whole concerts personally selected by the band’s tape archivist Dick Latvala (and after his death in 1999, David Lemieux), which started in 1993. After signing to Rhino Records in the mid-2000s, Dick’s Picks was discontinued (after thirty-six volumes!) and replaced with the Road Trips series, which is just the same thing with a different name. After seventeen Road Trips releases, that name was also retired and replaced with Dave’s Picks, named for the aforementioned David Lemieux. As of September 2017, there have been twenty-three of those. There is also a Digital Download series, which is Exactly What It Says on the Tin.

What a long, strange trope it’s been: