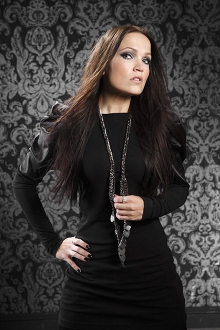 Tarja Soile Susanna Turunen-Cabuli (born August 17, 1977), generally known as Tarja Turunen or simply Tarja, is a Finnish singer-songwriter. She is a soprano and has a vocal range of three octaves.

She's best known as the former lead singer of the Finnish Symphonic Power Metal band Nightwish. In 2005, she left the band after receiving an open letter, leading to a public back-and-forth volley between her and the rest of the band. The letter claimed that she had missed too many rehearsals and that her husband influenced her behavior, though she vehemently denies these claims. Both she and her husband have since talked about their side of the story.

Tarja has the unusual distinction of being a female soprano singer for a metal band. Her voice alone led to Nightwish being labeled as "opera metal". "Female-fronted metal" has become a subgenre in part due to the success of Nightwish. In particular she's known to have inspired future Epica vocalist Simone Simons to study classical singing after hearing Tarja sing on Oceanborn.

Finnish President Tarja Halonen called her "the voice of Finland". She is well-known across Europe and has a small yet devoted following in North America.