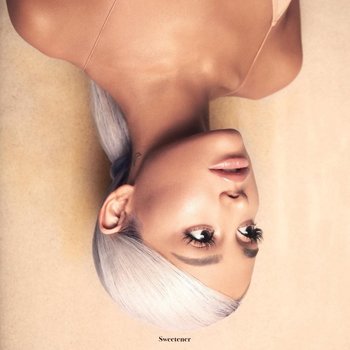 Sweetener is a 2018 album by American singer Ariana Grande.

In the wake of the success of her third LP Dangerous Womanin 2016, Grande started planning for her fourth album. However, on May 22, 2017 in Manchester, England, her concert was the target for a suicide bombing, in which 23 people were killed and more than 800 people were injured, including children. Grande would then later organize a television benefit concert, One Love Manchester for the victims and their families. The events in Manchester, along with a publicized break-up with rapper Mac Miller, would completely change the album's direction. Sweetener would mark a shift in Grande's musical direction as the album was darker and more introspective than her previous work and tackled topics such on perseverance, sexuality, and feminism. Grande's main collaborator was with Pharrell Williams, but also worked with Max Martin, Ilya Salmanzadeh, Nicki Minaj, Victoria Monét, and Missy Elliott.

Sweetener was a critical and commercial success, becoming Grande's third number one album, and would earn her first Grammy Award for Best Pop Vocal Album. The album was supported by three singles, "no tears left to cry", "the light is coming", "God is a woman", and "breathin".

This album contains the following tropes: