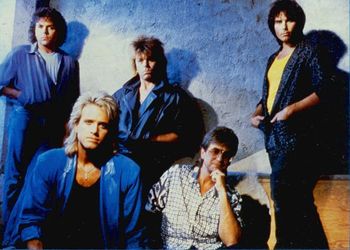 Survivor is an American rock group from Chicago best known for their number-one hit "Eye of the Tiger", which was famously featured in the soundtrack to the Sylvester Stallone film Rocky III. While they had other hits, none matched the huge success of this one, and as such they're often thought of as a One-Hit Wonder group.

For most of their career, the mainstays of the group were Frankie Sullivan (lead guitar) and Jim Peterik (keyboards, rhythm guitar). They formed the band's songwriting nucleus, first alongside Dave Bickler (lead vocal) and then with his replacement, Jimi Jamison.

Their greatest success was the inclusion of "Eye of the Tiger" in the soundtrack for the third Rocky film, which cemented their position as a leading Arena Rock group. Their Rocky IV follow up "Burning Heart" was a huge success as well. They had further successes with the album Vital Signs and its hit singles "The Search Is Over", "High On You" and "I Can't Hold Back", but subsequent releases were scuppered by poor marketing on the part of their record label, precipitating their breakup at the end of the eighties.

While they're less well-remembered than contemporaries like Journey or Foreigner, they had a harder and heavier sound for most of their career. Although out of the limelight since the end of the eighties, members of the group still perform as Survivor and have recorded one album. Until Jimi Jamison's untimely death in 2014, they had both vocalists, Jamison and Bickler perform together with them.

Not to be confused with the popular American TV show.

"It's the Eye of the Troper, it's the thrill of the fight":